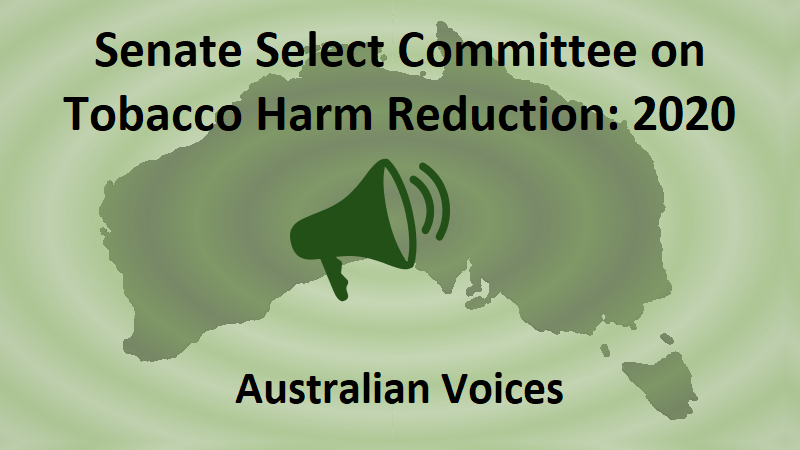 From the 2020 Senate Select Committee Inquiry on Tobacco Harm Reduction

Here are some of the personal accounts of Australian residents, as submitted to the 2020 Senate Select Committee Inquiry on Tobacco Harm Reduction.

This is what they had to say on a variety of aspects of nicotine vaping including, quit attempts, concern for their loved ones, the flavours in e-liquid, the cost savings of switching, their success at switching & their fear of the future of the nicotine vaping that got them off smoking cigarettes.

While some people make an easy, even accidental, transition from smoking to using a nicotine vaping product, other people had struggled to quit smoking across some years or even decades, using a variety of approved medications and other methods or techniques they thought might help..

I made many attempts to stop using most of the methods available including nicotine patches, nicotine lozenges, acupuncture, hypnosis and a six week course called ‘smoker’s end’. The only thing that finally worked was vaping.

Over the years I have tried to give up smoking using cold turkey, hypnosis, acupuncture, patches and finally Champix (despite the recorded dangers associated with that drug). Each in their own respect were successful but unfortunately was only temporary and of short duration. I often became irritable, depressed and unable to concentrate as a result.

Methods I used to quit included, nicotine lozenges and gum. Nicotine patches and spray. “Cold turkey” and internet support. Eventually I went to my doctor who prescribed Champix. I still went back to smoking after 3 courses of that drug which was unpleasant to take.

I smoked for a long time. I knew it was killing me, but I could never stop the habit. After many failed attempts over the years I decided to give vaping a try. From my first vape I have not wanted to have a cigarette.

Concern for Loved Ones

People who smoke are acutely sensitive to the harm it is causing their loved ones, and for many that in itself is a strong motivation to stop smoking. This concern stems from not just physical threats, but the spouse and children worrying about the loss of their parent, the smell and embarrassment preventing parents from interacting with their kids, or a dad being unable to play footy with his son..

My son, while very occasionally smoking, has almost completely switched to vaping. .. I feel a great deal of guilt that I smoked through his childhood while he breathed in my second hand smoke and he almost certainly would not have smoked if I had not.

I am able to play with my son for extended periods and my teenage daughters have seen the effects of smoking on my health.

Sitting there smoking and watching my kids run around, I had a “vision.” I saw myself being wheeled down the isle of their weddings, hooked up to oxygen. I saw myself as the father they would have to care for and bury early, all because I couldn’t quit smoking. That day I made the choice to give vaping a try.

I would not be the strong, healthy, happy and financially stable woman, mother, wife, sister, daughter, aunt, I am today were it not for vaping.

When talking to a new vaper, I encourage them to experiment with the many modifiable aspects of nicotine vaping, in order to find the vape they prefer to smoking. This might involve adjusting the voltage / wattage / temperature, the wick material or coil resistance, the amount of airflow, the puffing technique, the PG/VG ratios in the liquid, the nicotine type & strength and (very important for many people) the flavours..

I myself have taken to using simpler refillable e-cigs in which only the composition of the e-liquid is adjustable. One of the advantages of this is that I can carry two flavours (currently Espresso & Mango) at any time. Here is what others have to say about flavours.

.. if I was unable to access flavor liquids, I would likely return to smoking. It has been finding a device and flavour that works for me that has allowed me to quit smoking. Flavours are central, not incidental, to the smoke free proposition offered to smokers.

I gave [a vaping kit] a go and enjoyed the flavours and the similar smoking sensation it gave me and after a day or two of using it it dawned on me that I could just stick with this as there was actually no point in smoking anymore if I had this replacement.

I .. managed to successfully quit tobacco 15 months ago by vaping custard, bakery & desert flavours. I haven’t touched a cigarette since ..

The tobacco flavours tasted horrible. The strawberry milkshake e liquid containing nicotine was absolutely the thing that stopped me smoking tobacco. … I have not had a cigarette since that very first day trying vaping. But her [Mother in law] taste experience with e liquid flavours was completely different to mine and it highlighted to me the need for choice.

The cost savings of switching from cigarettes to nicotine vaping are significant. These people had more disposable income to spend on themselves and their loved ones.

I have improved my finances significantly without cigarettes, and my health has benefited as well.

.. vaping should be promoted because it is by far the easiest and cheapest way to give up smoking. I was spending +$150/week 8 years ago when smoking and $5/week when I took up vaping. The health and cost benefits are enormous.

Since starting to vape I figure I would have saved over $6000/year and my HEALTH.

I’m way better off financially. I don’t feel guilty for spending $200 on cigarettes a fortnight and sending my kids to school in $30 shoes. Now my kids have $200 shoes and I spend less than $50 on vaping a fortnight. I’m able to give my kids the things that I couldn’t because of my addiction to cigarettes. I can give them the things that they deserve.

Families I have introduced to vaping claim they have saved up to $30,000.00 per annum, money now spent on their children and business. Vaping has transformed their lives and has saved mine.

People had different goals when trying vaping, some intended not to quit smoking, others only wanted to quit smoking, while still others craved being free of nicotine. Nicotine vaping can work many different ways, according to the desired goal of the consumer.

Before switching to vaping I tried to quit smoking using willpower, nicotine gums, Champix, and other methods, to no avail. .. For me vaping has been a life line. There is no desire at all to smoke and at my age I appreciate a smoke free lifestyle.

Knowing that smoking was affecting my health & after many unsuccessful attempts to quit smoking I gave Vaping a go. That was 3 years ago. I have not had a cigarette since.

After another 1 year I put my vaper down one evening and never picked it up again. That was 3 years ago. To this date I’ve never wanted to smoke or vape again.

When I took up vaping, I still didn’t expect to be able to quit smoking. Dual-use for harm reduction seemed like the best of a bad situation. Within a month, I smoked for the last time. I didn’t even know it was going to be the last time.

I am so grateful for the invention of nicotine vaping which allows me to enjoy nicotine in a significantly less harmful way. I introduced my mother to vaping and she was also able to quit cigarettes and loves vaping.

Fear for the Future

Many Australians expressed fear that the upcoming ‘prescription only’ regulations would restrict their access to nicotine vaping, and that would make them feel anxious and possibly cause relapse to smoking cigarettes.

My promise, made to my daughter, remains intact to this date, any restrictions on nicotine will likely result in my return to my 40-year deadly habit of smoking, very easily. .. A prescription model is flawed with difficulties. I don’t like the thought of getting supplies either at a pharmacy. My Location in Regional NSW makes this somewhat more difficult. If I am running short on time I am more likely to return to smoking, and not bother with the hindrance of doctors, scripts, chemists and pharmacies. To much to do with all that, far easier to just buy smokes!

If Vaping was no longer available or more difficult to access, we [Michael, his partner and 6 of his friends] feel we would return to smoking cigarettes.

In my case I don’t know what will happen if my quit plan is interrupted, I would like to think I will remain strong and complete my pact with myself to never smoke a cigarette again. At a pinch I think I will succeed, but I can honestly say the prospect of a ban on nicotine juice is making me anxious.

I am genuinely concerned and anxious that your legislation will result in my returning to cigarettes to satisfy my 38 year nicotine addiction.

The vaping community of Australia are asking for protection, protection from cigarettes! Please do not force us back to the addiction that we all so desperately want to eliminate for good.

The excerpts seen above, were drawn from a small group (108) of the 8000+ submissions made to the Australian Select Committee on Tobacco Harm Reduction, conducted in late 2020. Due to the short time-frame & thereby chaotic nature of the inquiry, most of those 8000+ submissions will never be published.

At time of writing, the total of the published submissions came to 481 – just shy of 500. Of those 481, some were from those opposing retail sale of reduced risk nicotine products. Some were from businesses or professionals in public health.

Due to the large volume of (even) published personal submissions (376), further criteria were necessary to bring the number down to a manageable 108 submissions to plumb for relevant quotes.

The 108 submissions selected were of personal submissions from citizens or residents of Australia, where the person gives their name and age. In some cases, the age was inferred from other statements in the submission. While it was interesting to see the spread of ages (ranging from 21 – 77 years old) – limiting by ‘age known’ was also useful to help trim the large amount of personal submissions down to a more manageable group.