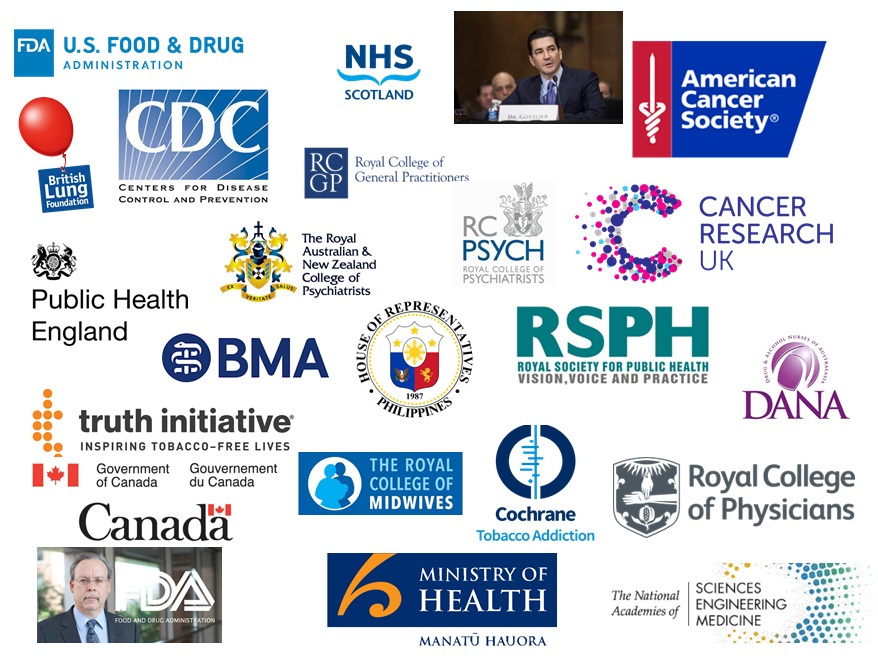 It is time for public health to embrace Tobacco Harm Reduction, and to actively encourage smokers to switch to vastly safer nicotine products.

What They Have to Say on the Safety of E-cigarettes

“While e-cigarettes are not without health risks, they are likely to be far less harmful than combustible tobacco cigarettes.”

“If a pregnant woman who has been smoking chooses to use an e-cigarette (vaping) and it helps her to quit smoking and stay smokefree, she should be supported to do so.”

“Make no mistake. We see the possibility for ENDS products like e-cigarettes to provide a potentially less harmful alternative for currently addicted individual adult smokers who still want to get access to satisfying levels of nicotine without many of the harmful effects that come with the combustion of tobacco.”

“Our new review reinforces the finding that vaping is a fraction of the risk of smoking, at least 95% less harmful, & of negligible risk to bystanders. Yet over half of smokers either falsely believe that vaping is as harmful as smoking or just don’t know.”

“Available data suggest that e-cigarette health risks are unlikely to exceed 5% of those associated with smoked tobacco products, and may well be substantially lower. In the UK, harm reduction is a recognised element of comprehensive tobacco control. E-cigarettes are effective in helping people to stop smoking. There are as yet no identified health risks from second hand vapour.”

“There are clear potential benefits to e-cigarette use in reducing the substantial harms associated with smoking, and a growing consensus that they are significantly less harmful than tobacco use.”

“There’s more evidence than ever that e-cigarettes are safer than smoking, and a way to give up altogether. Swapping cigarettes for an e-cig can improve your symptoms of lung conditions like asthma and COPD.”

“Evidence so far indicates e-cigarettes are far less harmful than tobacco and may help smokers to cut down or stop smoking. We do not believe there is justification for an indoor ban on e-cigarettes, either on the basis of potential harm to bystanders from second-hand vapour or that they renormalize smoking tobacco.”

“The evidence so far shows that e-cigarettes have significantly reduced levels of key toxicants compared to cigarettes, with average levels of exposure falling well below the thresholds for concern.”

“Endorses new Public Health England (PHE) report reflecting up-to-date evidence that is increasingly pointing in the same direction: not only is vaping at least 95% less harmful than smoking, but it is also helping increasing numbers of smokers to quit.”

“Electronic cigarettes may increase the chance of quitting smoking long term [and] no serious side effects were associated with their use (up to two years).”

“Some smokers may be unable or unwilling to quit using nicotine and would benefit by completely switching to a much lower harm nicotine delivery mechanism (including potentially a well-regulated e-cigarette).”

“There is an opportunity, through better regulation (and public information), to support smokers to switch to significantly less harmful alternatives, substantially reducing the risks to their health and those around them.”

“Research shows that 70% of people with schizophrenia and 61% of people with bipolar disorder smoke compared to 16% of those without mental illness. E-cigarettes and vaporizers provide a safer way to deliver nicotine to those who are unable to stop smoking, thereby minimizing the harms associated with smoking tobacco and reducing some of the health disparities experienced by people with mental illness.”

“Voted unanimously to adopt a resolution promoting harm-reduction as part of its National Tobacco Control Strategy, particularly the use of electronic cigarettes as a less harmful alternative for smokers.”

“E-cigarettes are a much safer alternative to smoking for those who are unable to quit with conventional therapies. DANA supports the use of e-cigarettes as a harm replacement tool or cessation aid for smokers who cannot quit with approved therapies, and supports low or no taxation on vaping products to maintain a price advantage to encourage smokers to switch.”

“Smoking kills. Helping people to stop smoking completely is our priority. There is now agreement based on the current evidence that vaping e-cigarettes is definitely less harmful than smoking tobacco. It would be a good thing if smokers used them instead of tobacco.”

“While we do not fully understand the long-term risks, psychiatrists should advise their patients that ECs are an effective option for some people to give up smoking and are substantially safer than continued tobacco use. All mental health providers should have policies in place that facilitate the safe and effective use of ECs.”

“E-cigarettes have the potential to benefit adult smokers who are not pregnant if used as a complete substitute for regular cigarettes and other smoked tobacco products.”

“We are, and remain, committed to the promise that e-cigs can help currently addicted adult smokers quit; and improve their health by doing so.” “If we could get all of those people [who smoke] to completely switch all of their cigarettes to noncombustible cigarettes, it would be good for public health.” The PowerPoint Presentation as it currently exists (latest version) is downloadable from the cloud.
See Evidence on E-cigarette Safety.pptx at Google Drive.