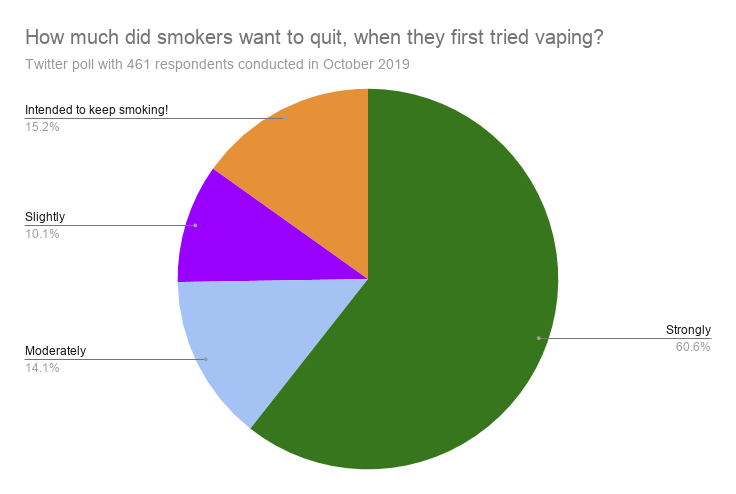 Tobacco control often repeats the mantra: “to be successful, you have to want to quit smoking”. While this is very true of the clinical (unpleasant & mostly ineffective) smoking cessation medications they have relied on for years, or the even less pleasurable and effective route of ‘cold turkey’, pleasurable alternatives like vaping turn that logic on its head. Here is the result of a poll asking current vapers how much they intended to quit, when first trying vaping.

Though 3 in 5 strongly wanted to quit (the green slice), 1 in 4 (the purple and blue slices) did not have strong motivation to do so, and 1 in 7 had no intention to quit. (It’s ironic that the percentage of those who accidentally quit smoking via vaping is better than the success rate of people who wanted to quit smoking, but relied on ‘proven’ smoking cessation methods!)

Stories Of Some Accidental Quitters

Here are some of the stories of people who intended to continue smoking when they first vaped, but became ex-smokers in the process.

..and of course, my own path to non-smoking. I smoked for 29 years and thought I’d die a smoker. The high level of tobacco excise in Australia though, was driving me to poverty. I thought I’d try vaping to replace at least some of the smoking to cut costs, but as I exhaled that first puff of coffee scented vapor, a silly grin spread across my face as I realized I was an ex-smoker! Although I gained pleasure from smoking, vaping was even more pleasurable.

Some Common Themes Of Those Who Accidentally Quit Smoking

Here is a summary of some of the ways people accidentally quit smoking, and the reasons they first tried vaping, as detailed above.

Why Us Accidental Quitters Are Important

Smoking rates in countries that allow & promote vaping are in free fall. This is partly because of the people who would otherwise still be smoking cigarettes, but found a better alternative. While vaping works for many who are determined to quit smoking, it also works for people who had no intention to stop smoking! A true marvel of our times.